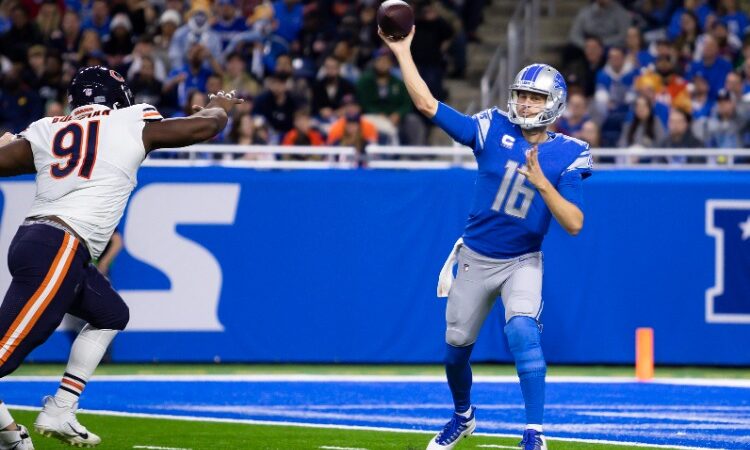 Well, the Lions haven’t been able to win with D’Andre Swift in the lineup, and now, they’re going to have to try and do it without him.

Losing the team’s biggest offensive weapon is probably not exactly the first ingredient in the recipe to gain the team’s first victory of the 2021 season, but such is life. Swift is out with a shoulder injury, and the Lions will presumably be putting the ball in Jamaal Williams’ belly early, often, and whenever they can.

Is it possible Williams’ more bruising style might be the elixir the Lions need? Anything is possible, right?

As far as the sportsbooks go, however, it’s not exactly looking like a successful plan, as the Lions are +265 underdogs at FanDuel against Minnesota and are getting 7.5 points, with the best odds on the latter at -115 on Caesars. If you’re looking to only get the touchdown, DraftKings is offering -105 odds on that score.

Clearly, the Lions are not getting any respect here, especially considering they are the home team in this intradivisional tilt.

Alas, that’s what happens when your team is entering the game with a 0-10-1 record.

crack, meth, cigarettes and radiation all age a person… but nothing ages a man faster than playing 2 years for the Detroit Lions. pic.twitter.com/6yXlPDRPUU

On the field, the Lions look like they’re about to be fed to a Vikings defense that has been analytically sound, if prone to giving up the big play. The “big play” hasn’t exactly been in the Lions playbook this year, so … yeah. The under 19.5 points for the Lions — at -110 on FanDuel — is not looking unattractive.

On the other side of the ball, the Vikings should be able to do as they please, either through the ground game and Alexander Mattison, or via the air with Kirk Cousins and his dynamic twosome of Justin Jefferson and Adam Thielen.

In these teams’ first matchup this year, the Vikings squeaked out a 19-17 victory at home on a last-second field goal. The Lions managed to keep the game close despite losing the time of possession battle and the yardage battle. In short: It probably should not have come down to a last-second field goal, hence the books making the Vikings a touchdown-plus favorite for the rematch.

"When you see your players give all that they have and you lose that way, it's tough."

Dan Campbell was emotional after the Lions' last-second loss to the Vikings. pic.twitter.com/SRMK9Job0K

Of course, much like Jim Carrey in Dumb and Dumber, there’s still a chance, and if the Lions are going to win this game, maybe it will come through the air and Jared Goff, where you can nab his over 225.5 passing yards prop at FOX Bet.

And if you think Goff is going to be throwing the ball more than usual, a good place to look for a receiving yard prop might be to slot man Amon-Ra St. Brown, who’s looking at a line of 40.5 yards, also at FOX Bet.

Of course, the other wager Lions fans might want to take a look at is the ever-depressing one over at DraftKings: Which team will the Lions defeat to get their first victory of the season?