Lion Eyes: Is Projected NFC North Doormat Worth A 25/1 Shot Thanks To Packers Drama?

Rodgers/Davante uncertainty shaking up the division, making new-look Lions worth a second glance 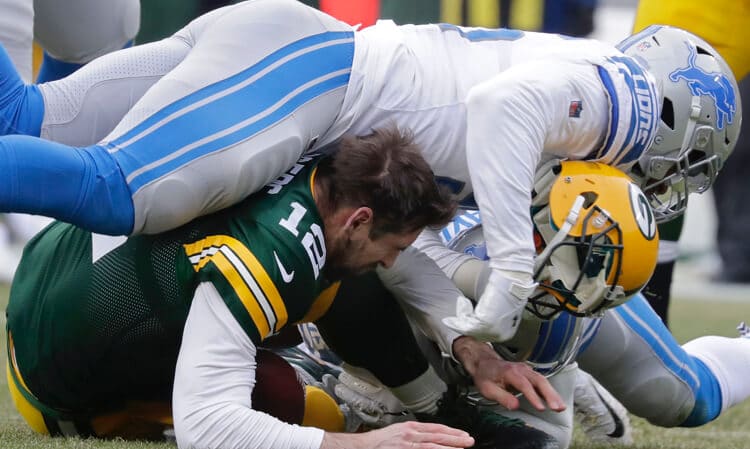 What did it mean? Are Rodgers and Adams leaving Green Bay? Is one retiring and the other finding a new team? Are they planning to win six championships together? Is this upcoming season their “last dance”?

The only thing the synchronized social posting meant for certain is that the two superstar players are coordinating their messaging. It also very strongly suggested that the drama in Green Bay isn’t going to slow down anytime soon.

Most of Michigan’s regulated online sportsbooks have pulled Packers-related futures betting off the board pending clarity about the team’s two best players, but Green Bay has been the favorite to win the NFC North all along, and even amid the chaos, two books — DraftKings and FanDuel — were posting division title odds as of Monday morning, with both still listing the Packers as such:

It’s hard not to notice that longshot down at the bottom of the chart. The Detroit Lions are in rebuilding mode. They are nobody’s idea of a contender, at least on paper. But in a four-team division, if one team is in danger of losing its all-world QB and another is deciding between Andy Dalton and a rookie, don’t you at least have to consider a 25/1 return on your money for a dark horse?

As Detroit sports fans are well aware, there’s been major overhaul with the Lions this offseason. There’s a new general manager, Brad Holmes. There’s a new head coach, Dan Campbell. And after a dozen years under center, Matthew Stafford was traded away for Jared Goff, who is seven years younger, a former No. 1 overall pick, a QB who has taken his team to a Super Bowl and has a 42-27 career record as a starter — yet is widely viewed as a serious downgrade from Stafford.

Prior to all this drama with A.A. Ron Rod-gers, the Lions were clearly viewing 2021 with minimal urgency, thinking instead about laying the groundwork to become a future contender. They drafted offensive tackle Penei Sewell seventh overall, bringing the average age of their projected starting O-line under 25.

And Green Bay’s potential slide to mediocrity doesn’t necessarily change the game plan in Detroit. The Lions are still, on paper, fourth out of four.

But what if two guaranteed losses against Rodgers’ Packers suddenly look winnable against Jordan Love’s Packers? What if Dalton is no better than Mitchell Trubisky or Nick Foles were for the Bears last year and the reins are quickly handed to Justin Fields, who, like almost every rookie QB in history, isn’t ready to win yet? What if the L.A. Rams were wrong to give up on Goff, who develops instant rapport with first-rate Lions tight end T.J. Hocksensen, while RB De’Andre Swift makes a Year Two leap? What if a coach willing to bite kneecaps off can inspire his players to overachieve?

There are two factors that are harder to “what if” positively: The Lions defense, which gave up more yards and more points than any other team in 2020, figures to be lower echelon again; and it’s hard to imagine the Minnesota Vikings, with steady veteran Kirk Cousins throwing the ball, completely stinking. (Although if Cousins should happen to get injured, the backup is rookie Kellen Mond.)

Look, the Lions going from worst to first this season is not likely. The sportsbooks’ over/unders for win totals give a fair idea of what to expect. The Packers are off the board everywhere, but they opened at 11 wins in the 17-game season. The Vikings’ number is 9. The Bears sit at 7.5. The Lions are at 5 — the second-lowest total in the league.

But every year, some surprise team wins its division. In 2020, it was Washington left standing atop a historically horrid NFC East. In 2019, the 49ers and Ravens were projected to win 8 and 8.5 games, respectively, and went a combined 27-5.

At 25/1 at DraftKings, could the Lions be a worthwhile wager as the rest of their division potentially collapses around them?

Like most Lions teams of years past, this one is expected to lose far more often than it wins. But there are enough new faces to make you wonder if this might be a new experience. Getting Rodgers out of the division prematurely certainly wouldn’t hurt in terms of jumpstarting a rebuild.