The draft is still months away, but sportsbooks are already posting odds for the No. 1 pick 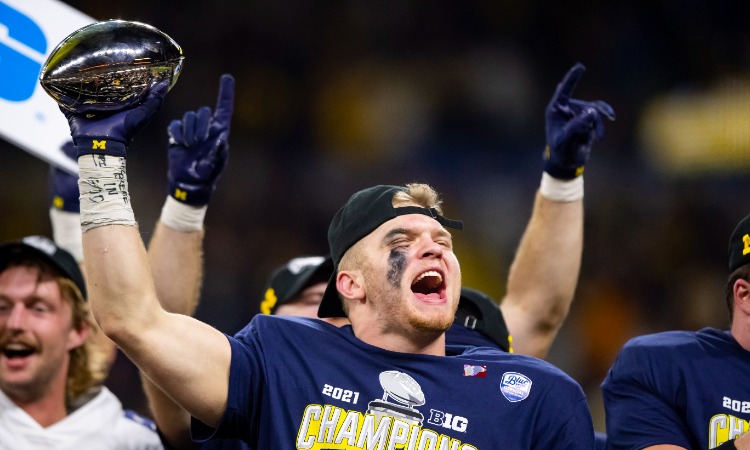 While 14 teams are getting ready for their Super Bowl run, 18 teams are already planning for the 2022 season, and with it, the NFL draft.

The draft will be held from April 28-30, and it’s never too early to start the lookahead process, as DraftKings and FanDuel already have first pick odds up on the board.

DraftKings, however, has the two as co-favorites at +105.

Creeping up the charts in recent weeks is University of Alabama offensive lineman Evan Neal, who is +260 on FanDuel and +275 on DraftKings. As recently as two weeks ago, Neal was +2000 on DraftKings, so he’s clearly getting some action to see those odds change so dramatically. With the Jacksonville Jaguars holding the first pick, the thought process behind Neal might be someone to protect franchise quarterback Trevor Lawrence. It’s a reasonable hypothesis.

After that, it’s a big dropoff, with both sites pricing University of Pittsburgh quarterback Kenny Pickett at +3000 and Derek Stingley Jr., a Louisiana State cornerback, at +5000.

There is the potential of some value with Pickett, as he’s widely considered the best quarterback in the draft class and a quarterback-hungry team could certainly trade up to get him.

The Detroit Lions hold the No. 2 pick, and there’s nary a mock drafter who doesn’t have the Lions A) holding on to the pick and B) taking either Hutchinson or Thibodeaux.

While little separates the two on paper, it would seem likely the Lions brass hope for Hutchinson to fall to them. Not only is he a U of M grad, but he was born and raised in the Wolverine State, having attended Divine Child in Dearborn for his high school years. His father, Chris Hutchinson, was also a star at Michigan.

The Lions PR team, at the very least, presumably hopes Hutchinson lands with the silver and blue.

The Lions will also have a decision with their second pick of the first round, via a previous trade with the Los Angeles Rams. Depending on who’s available, it’s entirely possible the Lions — who have Jared Goff under contract for 2022 — might take a chance on a quarterback. Perhaps Matt Corral of Ole Miss will still be on the board, or maybe Desmond Ridder of the University of Cincinnati.

Desmond Ridder has physical traits, but it's his processing that has me so high on his potential. Both pre and post snap.

Watch this play from the EZ view. Ridder slides the OL's protection into the CB blitz. Tells the RB where his eyes should be. Then calmly hits the hole shot. pic.twitter.com/7GtBJKkeJd

Alternatively, the Lions could go for an outside wide receiver to pair with budding superstar slot man Amon-Ra St. Brown. Chris Olave of Ohio State and Treylon Burks of the University of Arkansas both should be around later in the first round.

As draft season marches on, more sportsbooks will be offering markets, and within those markets there could be plenty of arbitrage opportunities for eagle-eyed bettors. Stay tuned.