A potentially embarrassing musical bet hangs in the balance 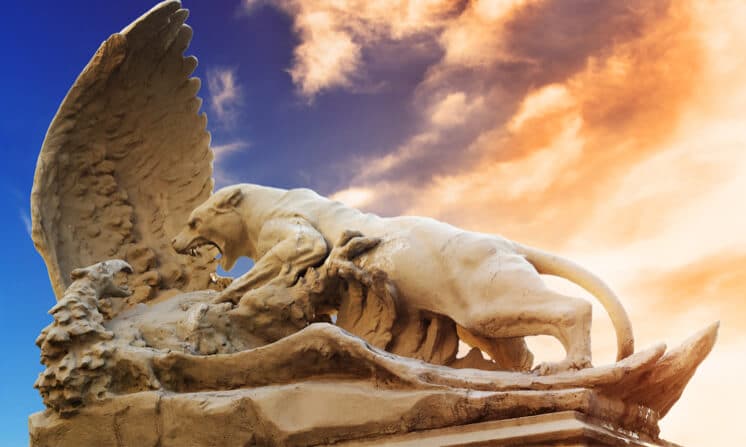 The Lions have to win once this season, right? RIGHT!?!?

Of course they do, and I’m betting they do so on Halloween at home against the Philadelphia Eagles.

It’s not cash that I’m betting. That would be too private, too easy. No, when you are reckless enough to bet on the worst franchise in NFL history to win for the first time in 12 games on the moneyline, it’s best not to have any money on the line.

This is a peer-to-peer bet, and in this case, that peer is ace MI Bets scribe Jeff Edelstein. So what’s on the line, if not cash? If the Eagles lose, Edelstein has to record himself singing “Let the Eagle Soar” by former U.S. Attorney General John Ashcroft and post a video of the performance on this site next week. And if the Lions lose, I have to do the same, only for “The Lion Sleeps Tonight” by The Tokens.

Despite its title, Ashcroft’s song is a mostly somber affair, with lyrics about the patriotic bird crying and dying “for what we’ve put her through.” Ashcroft is talking about a nation that’s been tarnished by war and ungodly transgressions, but the tune could just as easily be applicable to Eagles and Lions fans, who’ve been through a lot.

Like Ashcroft’s tune, there’s more to “The Lion Sleeps Tonight” than meets the ear. Ostensibly a dreamy doo-wop ditty filled with African harmonies and soaring falsettos, it is a sparse lyrical affair dominated by a-weema-wehs. In fact, the phrase “a-weema-weh” is uttered exactly 104 times in two minutes and 42 seconds, according to Genius.com. That’s a whole lot of a-weema-wehs in not a lot of time.

But the song, as its title suggests, is about a sleeping lion. He’s slumbering “near the village” of Detroit, a village he’s been sleeping in since 1957, when the Lions last appeared in — and won — an NFL title game. Remember Bobby Layne? The sleeping lion has been dreaming about the Blond Bomber for the last 64 years.

Yet even a melatonin-addicted jungle cat must awaken eventually. Edelstein is acutely aware of this. In not one, but two, NFL-oriented pieces published Friday, Edelstein (who’s nothing if not prolific) effectively faded his side of the bet. In a Lions-Eagles line shopper written for MI Bets, Edelstein notes, “This may be a case of two teams headed in opposite directions, and if the Lions are going to knock the idea of 0-17 out of everyone’s heads — they’re +850 to finish winless at DraftKings Sportsbook — this may be the week to do it.”

Meanwhile, in his weekly Sports Handle column, Edelstein goes so far as to identify the Lions-Eagles matchup as his trap game of the week, writing, “I don’t want to pick this, as a Lions outright victory would have me lose an embarrassing bet — but give me the Lions +3.5. They’re playing hard, and the Eagles … might not be.”

For a snapshot of how the action on the field might transpire, look no further than the eloquently titled documentary short, Eagle Attack Lions Mother Lion Save His Baby and Hunting Eagle To Revenge, which has over 18 million views on YouTube and begins with a shot of several goats perched in trees. In the expertly edited film, a pride of young lions is seen frolicking in the sun, then the rain. At the 2:10 mark, an eagle is shown cockily shimmying its head. Ten seconds later, that confidence seems warranted, as the eagle is shown cruising through the sky with a helpless cub ensnared in its talons.

But when that eagle comes down to earth, the young lions surround it and tear it to shreds. The cubs are green but improving, learning to support each other and work as a team — just as the pride of Detroit has done in so many near-miss losses this season.

The eagle? Well, the eagle is Jalen Hurts. And, boy, does it ever.