As Short Home Underdogs, Is This Finally The Week When The Lions Win A Game? 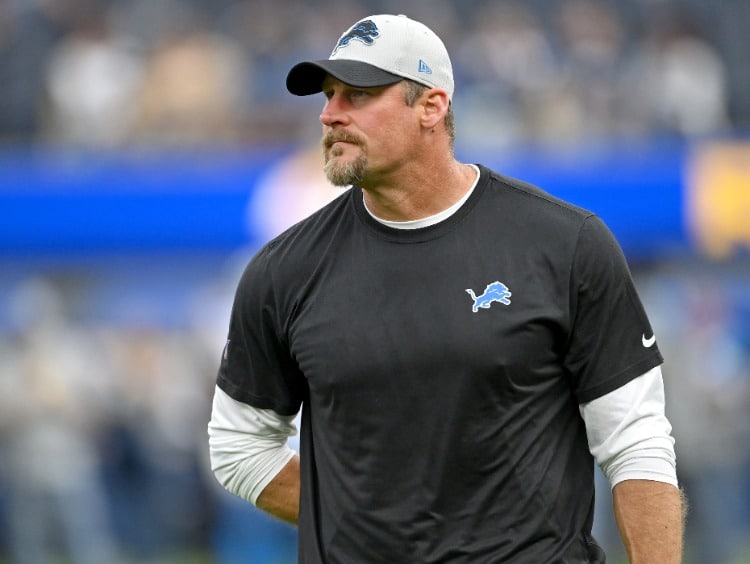 Is this going to be the week when the Detroit Lions finally get into the win column?

This seems like the right spot. The Lions are currently playing inspired, if losing, ball under head coach Dan Campbell. Last week, the Lions had no business competing with the Los Angeles Rams, but Campbell — in what was kind of a Ted Lasso moment of sorts (Can’t you just see it? An assistant coach Nate-ing a “false nine” idea of sorts on the chalkboard?) — pulled out all the stops.

Dan Campbell doesn't give an F as he's chasing his first ever win.pic.twitter.com/SoafeKJHTW

A fake punt? Sure, how about two of ‘em?

The @Lions dial up a fake punt again! #OnePride

Making sure to get the ball into D’Andre Swift’s hands? You betcha.

Alas, in the end, all of it wasn’t enough as the Rams and Matthew Stafford scored 11 unanswered fourth quarter points to win 28-19.

But this loss was different. The Lions came to play, they played their hardest, and it’s clear this team loves their coach.

This week, the Philadelphia Eagles come to town, and this team has a coach who talks about gardening.

Is Nick Sirianni coaching a football team or gardening some flowers? 🤯 pic.twitter.com/wZVMrnO8eb

But beyond that, the Eagles don’t seem to be playing inspired ball. Take away Jalen Hurts’ consistent fourth quarter productivity, and there would be a lot of talk about the Eagles being one of the worst teams in the NFL. Add in a quarterback controversy, as the rumor mill has the Eagles brass not happy with Hurts as their long-term answer and Gardner Minshew — whom the Philly faithful will love due to his man-of-the-people vibe — waiting in the wings.

To be clear: This may be a case of two teams headed in opposite directions, and if the Lions are going to knock the idea of 0-17 out of everyone’s heads — they’re +850 to finish winless at DraftKings Sportsbook — this may be the week to do it.

Sportsbooks aren’t quite on board

Of course, the sportsbooks aren’t quite there with the Lions, installing them as 3.5-point underdogs across the board. Best bang for the buck there is at PointsBet at -107 for the Lions. If you’re willing to give up that half-point, FOX Bet is giving +110 odds on the Lions +3.

On the moneyline, FanDuel has the Lions at +162.

Total points? A healthy 48 points, offered at -110 at BetMGM and across the board.

Last week, the Lions got the first half bugaboo out of their system, putting up 16 points in the first two quarters, which was nearly half the amount of first half points they had put up in the previous six games. If you think the Lions are going to once again come out aggressive, their first half total points is currently at 9.5, but only DraftKings is offering that number, and you’re paying for the over at -150.

With D’Andre Swift’s touch counts trending in the right direction — 12, 17, 18, and 21 over the last four — his props might be real values this week. As of this writing, they have not yet been released, but any rushing + receiving total that’s in the 90s looks ripe for the over. Additionally, Swift is at +800 at BetMGM to score the first touchdown of the game.

Lastly — and back to total points for a moment — this game does have a little bit of a loosey-goosey feel to it, and as such, an over 55 (or something along those lines) addition to a parlay wager will seriously juice the odds.