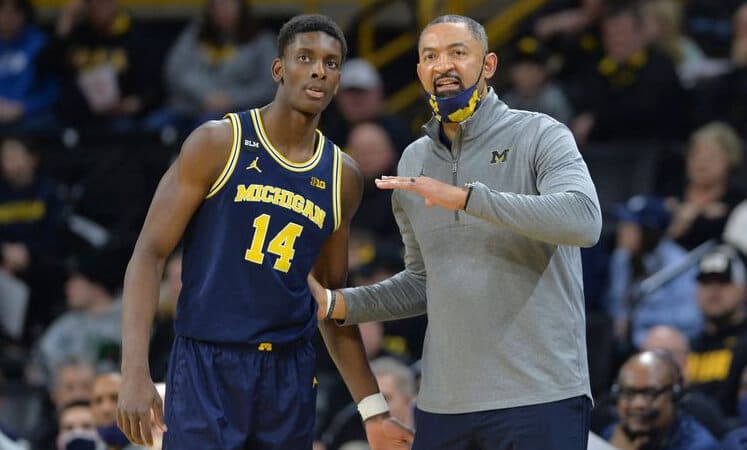 The University of Michigan men’s basketball team will take the floor Wednesday night against Rutgers, fighting for an at-large NCAA tournament berth. The Wolverines, squarely on the NCAA tournament bubble, will battle without their head coach.

Juwan Howard received a five-game suspension — the duration of the regular season — for hitting a Wisconsin assistant coach following the team’s 77-63 defeat to the Badgers on Sunday. The story drew national attention as the video of the kerfuffle circulated on social media and became sports talk-show fodder. Due to his punishment, Howard will be absent during a critical portion of Michigan’s schedule, and former St. Joe’s head coach and current Michigan assistant coach Phil Martelli will act as the interim head coach.

Wednesday night against Rutgers, the Wolverines are listed as 4.5-point favorites at major sportsbooks like DraftKings and FanDuel after opening as 5.5-point favorites, but they’re also without two players. Terrance Williams II and Moussa Diabate are out for Michigan, as they’ll serve one-game suspensions. Diabate posted 15 points and nine rebounds in the first meeting between the two sides this season, a 75-67 Rutgers win.

When trying to handicap the Wolverines without Juwan Howard, it’s worth considering the one-game absence of Diabate and Williams. In the four games after the Wolverines host Rutgers, however, it’s hard to know just how much of an impact Howard’s suspension will truly have.

“By the time we get to late February, there’s probably not a ton of high-concept coaching going on,” Chase Kiddy, writer and analyst for The Roar by BetMGM and co-host of The Lion’s Edge Podcast, told MI Bets via email. “At this point, the players know what kind of offense they’re running and what the program expectations are; their ability to execute is much more detached from the adults standing on the sidelines on Feb. 20 than it might be on, say, Nov. 20.”

Kiddy acknowledged that coaches still have important roles late in seasons, especially when it comes to game-to-game strategy and in-game adjustments.

“This, I think, is where Howard’s departure is hypothetically more likely to affect point spread bettors,” Kiddy said. “Particularly in tight games that are closely handicapped, what kind of drop-off is there in key ATO strategy from Howard down to his top assistants? Answering that question goes a long way toward solving the delta on handicapping Michigan’s new coaching reality.”

Phil Martelli was very quick to point out that Juwan Howard's offensive mind is elite. He also mentioned several times that Howard has a rolodex of plays out of timeouts that would rival any basketball coach ever.

High praise from a basketball OG.

That brings us to Martelli. The coach won 444 games as the head coach of St. Joe’s, winning AP Coach of the Year honors in 2004.

He’s not a typical interim coach, as he held a head coaching position for over two decades. Martelli joined Michigan in 2019, so he knows the roster well and understands the strengths and weaknesses of individual players, as well as those of Big Ten opponents.

Given Martelli’s experience, it’s unclear if Howard’s absence will drastically impact Michigan’s performance down the stretch of the season. Odds to make the NCAA tournament aren’t widely offered at major sportsbooks, but odds to win the tournament are commonly offered across various books.

Michigan’s future odds didn’t change much as a result of Howard’s suspension, which makes a ton of sense.

“Last week, before anybody threw hands, Michigan was 100-to-1 to win the title at BetMGM,” Kiddy said. “This week, Michigan is … still 100-to-1. So they haven’t budged at all. There’s two ways to interpret that, I suppose. One is that Howard’s disappearance for the final five games of the regular season doesn’t materially change Michigan’s chance to win six games in March. The other is that Michigan doesn’t have much of a legitimate shot to win anything this year, with or without Howard. Both statements are probably true.”

Don’t expect to profit if you wager on Michigan to win the national title, but there could be short-term value in betting on Michigan in upcoming games. With the widespread coverage of Howard’s incident and his suspension, don’t be surprised if casual bettors doubt Michigan as a result.

Sports talk shows and college basketball social media accounts spent the last few days debating Howard’s actions. Analysts discussed the length of Howard’s suspension and the potential negative impact his actions had on his team. While nobody condones smacking an opposing coach in the face, there’s a case to be made that Howard’s suspension doesn’t drastically impact the rest of Michigan’s season.

I think the Michigan game got tougher now for Rutgers. Being without HC Juwan Howard, starter Moussa Diabete & key reserve Terrance Williams could galvanize the Wolverines in a positive way at home. Phil Martelli coaching too is a plus. Huge bubble ramifications for both teams.

“Considering how long both men have been coaching, it’s fair to assume Martelli is just as capable as Howard, if not more so,” Kiddy said. “But there’s one question that’s even more revealing here: How does the market perceive the difference between Howard and Martelli? My suspicion is that most bettors (particularly public bettors) will blindly fade Michigan during this stretch, which likely creates a market inefficiency in Michigan’s favor even if Martelli is lousy. At this point, there’s just no way the on-court differences without Howard can equal the hype that this story has received in the news cycle.”

In Kiddy’s eyes, Martelli is a competent coach, and the Wolverines desperately need to win at least a few of their final five games to put themselves into the NCAA tournament. Michigan has plenty left to play for, even with Howard off the bench for the rest of the regular season.

So should Michigan fans rush to their phones to place bets on the Wolverines on Wednesday night? Not so fast.

“I can’t recommend taking Michigan -5.5 against Rutgers on Wednesday — the Wolverines are 6-12 ATS as a favorite this season and will be missing multiple players on top of Howard’s sideline presence — but I would consider targeting Michigan as an undervalued commodity starting on Sunday against Illinois,” Kiddy said. “If the market overreacts to the Howard news cycle, sharp bettors will have an opening.”