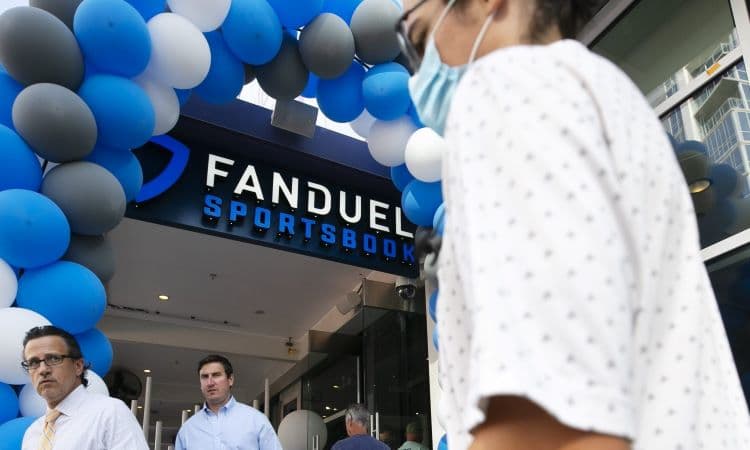 FanDuel continued to make inroads north of the U.S. border last week with the hire of Dale Hooper as general manager of its newly created Canada division.

Hooper, a former executive at Canadian media company Rogers Communications, most recently served as a partner at Deloitte Canada, where he focused on the cannabis industry. The appointment of Hooper comes as Ontario nears the highly anticipated launch of its iGaming market, when the province will open the online sports betting market to private sportsbook operators.

“Dale has a proven track record running high growth enterprises along with strong relationships that will be invaluable to our success in Canada,” said FanDuel Group CEO Amy Howe in a statement. “He is a respected leader known for his ability to scale business units effectively, a critical skill set, as we aim to bring the excitement of our sportsbook and iGaming products to Canadian citizens. It’s with great excitement that I welcome him to our team.”

With the U.S. set to reopen the border to Canadian foreign nationals for all travel beginning Nov. 8, the launch of Ontario iGaming may have some impact on the sports betting handle in Michigan. Windsor, the third-most populated city in southwest Ontario behind London and Kitchener, is located about 2.5 miles from downtown Detroit, via the Detroit-Windsor Tunnel.

While Ontarians in border communities may take advantage of the opportunity for shopping or work purposes, Canada Gaming Association CEO Paul Burns told MI Bets that he doesn’t see Michigan attracting many Canadian bettors prior to the Ontario iGaming launch. Canada decriminalized single-event sports betting in June with the passage of Bill C-218 in the Senate.

As gaming analysts refine their estimates on the scope of the Canadian legal sports betting market, the monthly hockey handle will serve as a key data point. Before the passage of C-218, Canadians had the opportunity to bet legally on hockey for more than a decade. But the wagering menu was sparse, limited to risky parlays offered only through the nation’s provincial lotteries.

For the moment, single-event sports betting (i.e., Wednesday’s NHL matchup between the Detroit Red Wings and the Washington Capitals) is only available through lottery offerings such as the Ontario Lottery and Gaming Corporation’s PROLINE+ sports betting platform. The launch of iGaming in Ontario will open the market to top private sportsbooks, ranging from FanDuel to DraftKings, as well as smaller brands such as PointsBet and theScore.

While Michigan sportsbooks handled $354.3 million in September, an increase of 84.2% from the prior month, the Michigan Gaming Control Board does not provide a breakdown of wagering trends by sport. As a result, it is difficult to ascertain hockey wagering patterns across the state.

In Nevada, though, bettors wagered $44 million on hockey last June when the hometown Vegas Golden Knights made it to the Western Conference finals. When asked at this month’s Global Gaming Expo for a reasonable estimate of the pro hockey handle anticipated in Canada during the first year of single-event betting, NHL Chief Revenue Officer Keith Wachtel said the league has not come up with a projection.

Wachtel discussed the league’s advertising protocols for sports betting at length during a panel appearance at the conference. On the eve of the regular season, the NHL’s new broadcast partners ESPN and Turner had yet to accept any national advertising on sports betting, Wachtel told MI Bets. The NHL has 10 sports betting partners, including FanDuel, DraftKings, BetMGM, and Caesars Sportsbook, as well as three sportsbook operators in eastern Europe.

The landscape for advertising in Canada is somewhat different. Three weeks into the season, Sportsnet (Rogers) has aired numerous PROLINE+ commercials on NHL broadcasts in Ontario. Hooper, who spent several years as Rogers’ chief brand officer, may be able to tap into his extensive Rolodex to broaden FanDuel’s advertising reach across the province. Under Hooper’s stewardship, Rogers achieved share price growth of ~50% during a critical three-year turnaround period as Hooper helped drive the company’s digital transformation.

"The former Deloitte, Rogers and PepsiCo exec brings his experience in regulated spaces to the U.S. sportsbook."

“It is an incredible time to be a part of the growing sports gaming industry, and I look forward to joining Amy and the team as we bring the No. 1 sportsbook to Canada,” said Hooper in the statement. “I am proud to be joining the industry leader at such a momentous time.”

FanDuel initially signaled an interest in the Canadian sports betting market when Flutter CEO Peter Jackson noted during an investor presentation in March that the company could extend its North American scope outside the U.S. due to the regulatory progress with single-event betting. FanDuel already offers a daily fantasy sports product in Canada.

The Ontario iGaming market is tentatively scheduled to go live in December, according to the Alcohol and Gaming Commission of Ontario.