Eastern Michigan Again An Underdog To Get Rare Bowl Win

Eastern Michigan is no longer a doormat, but can it get its first bowl win since 1987? 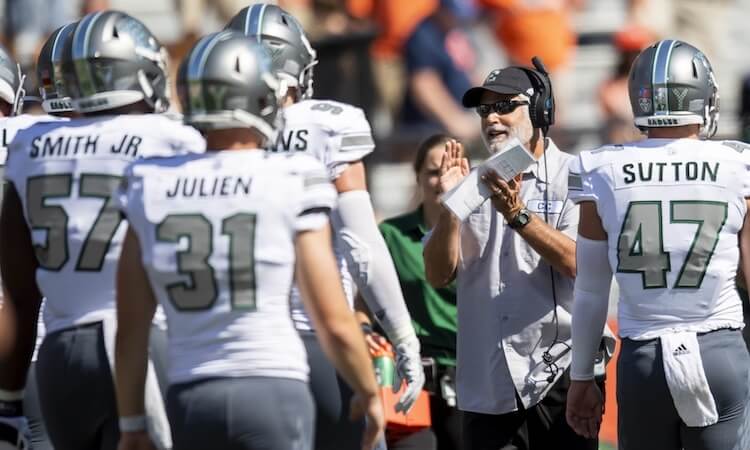 Once one of the perennial doormats in the national college football landscape, the now-plucky Eastern Michigan Eagles have an opportunity to end a disheartening streak on Saturday. If EMU (7-5) can get past Liberty at the LendingTree Bowl in Mobile, Ala., the Eagles would secure their first bowl win since 1987, when they were victorious in the now defunct California Bowl against San Jose State.

The time may be right, as Liberty (7-5) limped toward the postseason with double-digit losses in its last three games, including its last two as the favorite. The Flames were first trounced by Louisiana-Lafayette 42-14 as a 4-point favorite, then fell to Army, 31-16, while favored 3.

Liberty is a 9.5-point favorite at nearly every Michigan online sportsbook, but there is one outlier: If you dig the chalk, you can snag 8.5 at DraftKings.

Coaching has made the difference for EMU

When head coach Chris Creighton took over the Eastern Michigan football program in 2014, it had not achieved a winning season since 1995 — and that was just above the line at 6-5. And for a couple seasons, with records of 2-10 and 1-11, it looked like the same old EMU.

But the script flipped in 2016, when the Eagles achieved a 7-5 regular-season record and arrived at their first bowl game in 29 years.

The 2021 campaign is their third seven-win season under Creighton, and they’re set for their fourth bowl in six seasons. But a win would take the program to the next level. Like the Eagles’ previous three bowl attempts under Creighton, they are once again an underdog.

Get a good look at Malik Willis

Under center for Liberty will be projected first-round draft pick Malik Willis. So if you are an NFL fan, you might as well get acquainted now.

The Auburn transfer started the season on fire, with 11 touchdown passes and zero interceptions through five games (when Liberty was 4-1), along with 418 yards and six more scores rushing. But Willis has slipped during Liberty’s current losing streak, with six interceptions and three passing touchdowns in his last three games. He has also carried a significant load in the running game during that stretch, with 63 carries for just 136 yards in those three games (2.2 yards per carry), and he was sacked 21 times.

“It’s a monster challenge,” Creighton said of defending Willis. “He can run it, he can throw it, he runs their offense. He’s super, super talented. We know he’s dangerous on the ground and in the air, by design and on his own when things don’t go exactly how they planned.”

What about the total?

EMU quarterback Ben Bryant has actually put up more passing yards than Willis this season (2,921 to 2,626), and he loves to connect with wideout Hassan Beydoun (86 receptions, 932 yards).

Hassan Beydoun on the Jet Sweep for Eastern Michigan. Buckle up if you have a pregame Under in Ypsi @EMUFB | #ETOUGHpic.twitter.com/014rA6AsWl