Rookie Of The Year Odds Watch: Did Pistons Get Their Man In Cunningham? 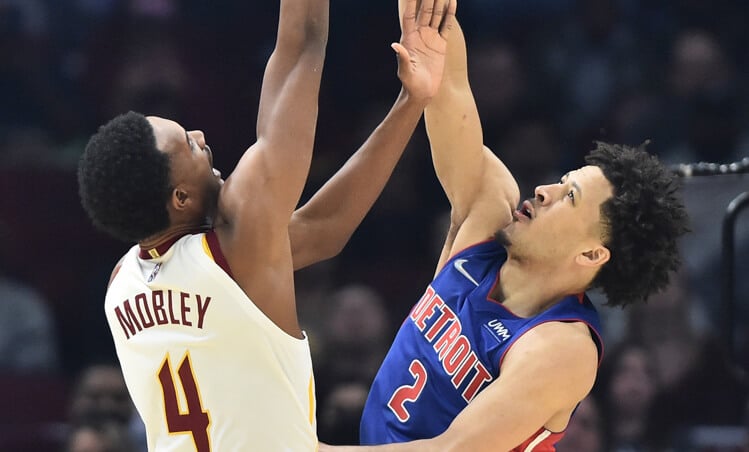 Just like before the start of the season, oddsmakers currently have the NBA’s top two draft picks, Cade Cunningham and Jalen Green, neck-and-neck in the race to win Rookie of the Year honors, with FanDuel offering +430 on either player as of Tuesday afternoon.

Unlike during the preseason, however, neither Cunningham nor Green are presently favored to be the league’s top rookie, with Cavaliers big Evan Mobley and Raptors wing Scottie Barnes thoroughly outplaying their first-year peers and drawing shorter ROY odds a few weeks into the season.

It’s a tiny sample size, to be sure, especially considering Cunningham has only played eight games after being sidelined with an ankle injury to start the season. The 3-10 Pistons, who face the division-rival Indiana Pacers at home on Wednesday night, and 1-13 Rockets (Green’s employer) are two of the league’s four worst teams, while the Cavaliers and Raptors look primed (for now) to compete for playoff berths. Being a rookie in the NBA is a steep enough learning curve. Having to do it on a really crummy team makes the climb even steeper.

Cunningham has overcome a horrendous shooting start (7-39 from the field over his first three contests) to acquit himself nicely over the past five games, flashing the sort of all-around game that compelled the Pistons to snap him up as soon as they could. But Barnes and Mobley have been really good by any standard, which begs the question: Did Detroit take the wrong player with the top pick in the draft?

‘Mobley is the benchmark for everybody’

Without answering that question directly on Monday, FanDuel Director of Trading John Sheeran told MI Bets, “I think Mobley’s been super impressive. I spoke to someone who said they’ve never seen a rookie with more offensive potential. With rookies, you don’t necessarily know how they’re going to take to the league. When you get a player like Mobley, you’re maybe a little lucky. But you go back and assess it and for sure he’s the frontrunner.

“Cade Cunningham has always looked like a player who’s going to have to progress and learn his craft and understand his role,” Sheeran added. “There are factors there, like the team he’s playing on — that represents a challenge. I think the two players at the top of the [ROY] market (Barnes and Mobley) have really come a little out of left field. Those guys are playing incredible. The Cavaliers are not a really good team, but look at their record (9-6). Mobley is the benchmark for everybody, I think.”

That may be so, but DraftKings Content Specialist Julian Edlow thinks it’s far too early to hand the ROY trophy to Barnes or Mobley, the latter of whom sprained his elbow and will miss up to a month of action after shooting a career-worst 0-11 from the floor in the Cavs’ hard-fought loss to the Celtics on Monday night. (Speaking to how well-rounded Mobley is, he also chipped in 9 rebounds, 5 assists, and 2 blocks.)

“There’s definitely value on Cunningham at +500,” Edlow told MI Bets on Monday, hours before Cunningham played the best game of his career in posting 25 points, 8 assists, and 8 rebounds in a blowout loss to the Sacramento Kings and saw his ROY odds drop from 5/1 to 3/1 at DraftKings on the news of Mobley’s injury. “He was the best prospect in this draft, he’s barely played, he’s coming back from the ankle injury. I think that ankle has played a role” in his poor shooting (35% from the field) thus far.

“He’s gotten a little better,” Edlow added. “It’s there. We just haven’t seen it because of the injury. He can work his way back and he’s the best player on his team, which you can’t say for a lot of the other guys. I think what we didn’t anticipate was how good the third and fourth picks would be. But they can hit a rookie wall, get hurt, and miss some time like Cunningham did.”

Edlow remains bullish on Cunningham “because of how high-level and well-rounded a prospect he is.” If he were to conduct a re-draft, Edlow would still select Cunningham first. But he hedged a bit, saying, “Mobley is a close second, and maybe if things stay the way they are, is the guy we’re saying should have been the No. 1 pick.”