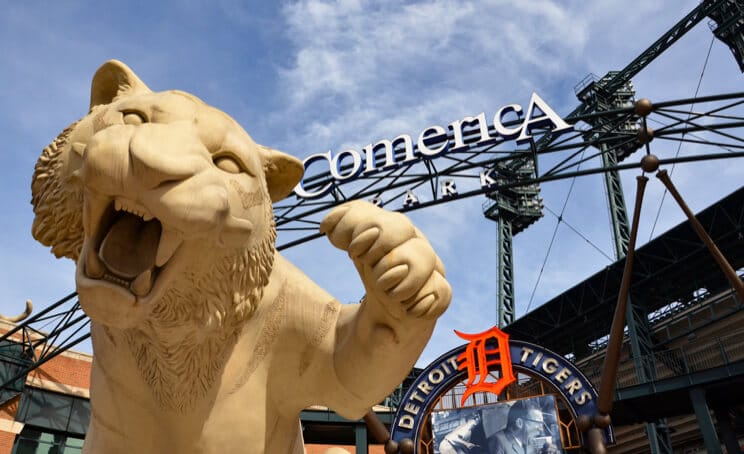 Andy Morrissey is 30 years old. He grew up near Detroit and attended Michigan State University. He has never witnessed a Lions victory in the postseason, the last of which occurred on Jan. 5, 1992 — two months before Morrissey was born.

Despite the team’s playoff drought — to make no mention of the fact that the Lions last won an NFL title in 1957, nearly a decade before the Super Bowl came into being — Morrissey thinks Dan Campbell’s squad is the closest of Detroit’s four horrifyingly bad major pro sports (MLB, NBA, NFL, NHL) franchises to being competitive.

“It’s been brutal here,” Morrissey, now a golf analyst at WynnBET, said of Motown’s historically dire sporting situation. “The closest one to success is probably the Lions. I like what they’re doing.

“The Lions have always been bad, but the Red Wings were a dynasty. The Tigers were really good, but they have been abysmal. The Pistons are doing some things, but I really like the Lions this year, more than usual. Their schedule is very easy. I think their division is attainable — I personally bet them to win the division at 12/1. They have a great offensive line, some weapons on the outside, and a quarterback that’s been to a Super Bowl.”

That’s an especially rose-colored view of a team that Morrissey’s own sportsbook gives 200/1 odds of winning next year’s Super Bowl. WynnBET is similarly bearish on the Pistons, assigning them 200/1 odds to win the NBA title — which is actually bullish when compared to Caesars’ 500/1 line. As for baseball’s Tigers, WynnBET gives them a 500/1 chance to win the World Series, while the Red Wings are projected to be the cream of the craptastic crop, with 75/1 odds to swig Stroh’s out of next year’s Stanley Cup.

The weight of these Wings

This soft bigotry of low expectations is threatening to become endemic — and for good reason. The last Detroit team to even make the playoffs was the Lions in 2017, with the Wings advancing the year prior and the Tigers and Pistons last appearing in the postseason in 2014 and 2008, respectively.

“The Wings carried that weight for us for a long time,” said lifelong Detroit-area resident Josh Malerman, author of Bird Box and lead singer for The High Strung. “You’d be like, ‘Nothing’s good,’ and then it’d be like, ‘The Wings are good.’ And you’d be like, ‘Oh yeah.’ Hockeytown, right? But, man, it’s been a minute for them, too.”

Of the Lions, Malerman conceded that they could be the the worst franchise in the history of professional sports, but added, “Last year, there was something about that team. This is different. This feels like there’s something to build on. I don’t know if it’s Dan Campbell and his mojo or spirit. They’re younger, they’re hungrier, and I wouldn’t be surprised if they were around .500 this year.”

By way of reminder, the Lions went 3-13 last season, although they had a bountiful draft.

The same could be said about their most recent draft by the Pistons, who scooped up Jaden Ivey and Jalen Duren in the first round last week. Their situation tickles Malerman, the sort of DE-TROIT BASKET-BALL fan who appreciated Bill Laimbeer for his pillowy touch from the elbows rather than the damage he inflicted when throwing them.

“The Pistons feel good to me, because we’ve got Cade Cunningham and the fifth pick tomorrow,” Malerman said shortly before the draft. “But also, I’m watching the Warriors play, and thinking their top 10 guys are better than our first and wow, we’ve got a ways to go. The Pistons, back when we traded for [Mark] Aguirre, we were knocking on the door and we had a stable of Hall-of-Famers. But things seem to work in a different way now.”

As reflected in WynnBET’s odds, Morrissey and Malerman agree that it’s the Tigers who “seem farthest from glory,” as Morrissey put it.

“Baseball is the one that kills me. Unless you’re spending so much money, which we kind of did in the 2000s, it almost feels like a time loop,” said Malerman, whose novels are prone to embracing such chronological aberrations. “With baseball, sometimes I’m just like, ‘Eat lunch, talk to your friends, just be glad a game is on.'”

In other words, living in a city of losers sucks, but one should forever be grateful that there’s a team taking the field — or ice, or floor.