Detroit Lions Kick Off Exhibition Season Friday, In First Of Many Games As Underdog

The Lions are expected to play starters at least a quarter vs. the Bills 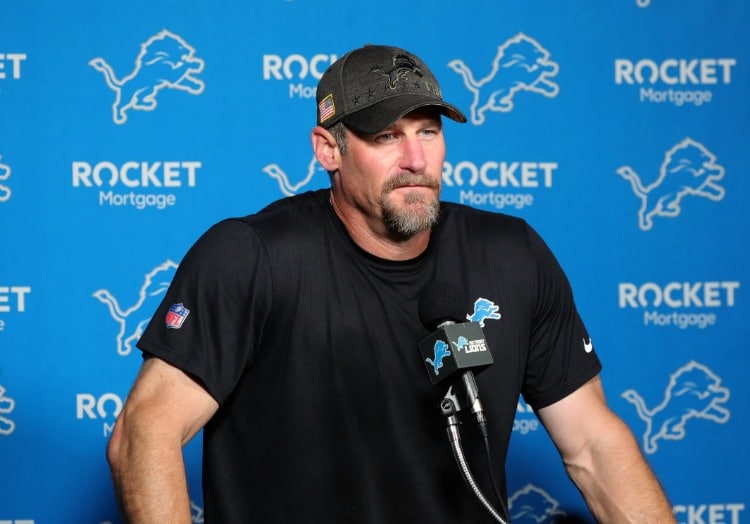 To put an even finer point on it: Anyone born the day the Lions beat the Dallas Cowboys in the NFC wild card game on Jan. 5, 1992, is now 30 years old.

What’s even crazier is the following: Previous to that victory, the last time the Lions won a playoff game was … 1957, when they beat the Cleveland Browns for the NFL championship.

So yes, it’s been six-plus decades of futility for the Detroit football team, and if the oddsmakers are to be believed, it’s going to be another long season in Lionsville.

Although …. if you’re looking for an even better return on Super Bowl odds for the Lions, head on over to BetMGM, where you can grab Detroit to raise the Lombardi trophy at +25000. And while you’re there, you may as well throw a few ducats at rookie head coach Dan Campbell for Coach of the Year. He’s sitting at +5000.

Honestly, the tightest spread you might find all year for the Lions is on Friday night, when the team kicks off its three-game exhibition schedule at home against the Buffalo Bills. For the 7 p.m. kickoff, the Lions find themselves as +1.5 underdogs (at -110) at BetMGM, with the best moneyline also at BetMGM, at +105.

And it might actually be a half-decent bet, as the Lions are expected to play their offensive starters for a full quarter, according to a Detroit Free Press article.

“We’re just going to kind of take it as it is right now,” Campbell said in the piece. “Instead of worrying too much about where we’re at for Indianapolis with that [third preseason game] let’s just take it as it comes. Let’s get these guys where they’re playing together in game-like situations, we’re calling [plays] as coaches, we’re going through the whole mechanics of all of it. So I think we’re shooting for around a quarter, somewhere in there.”

So who are these starters?

At quarterback is Jared Goff, who is looking for a fresh start after suffering quite a statistical fumble in his last two years as a member of the Los Angeles Rams. Goff, of course, is replacing Matthew Stafford, who was sent to the Rams in the Goff deal.

For those interested, Goff is +12000 to win the MVP and +4400 to lead the league in passing yards over at FanDuel.

Standing behind Goff will be running backs D’Andre Swift — one of the NFL’s most electrifying players — and Jamaal Williams, who is not.

Campbell — who is also on record as saying grit, not talent, will decide roster spots — hired Anthony Lynn as his offensive coordinator, and Lynn said he sees Williams as his “A” back and Swift as the change-of-pace “B” back. Let’s hope he’s lying, because Swift is dynamite in a can and Williams is … well, more can-ish.

On the wide receiver front … “thin” is a word that comes to mind. Led by projected No. 1 Breshad Perriman, the passing game will probably come close to leading the league in fourth quarter yards, but not much else. Joining Perriman will be the oft-injured Tyrell “The Gazelle” Williams, and rookie Amon Ra St. Brown is making headway as the preferred slot man. None of these players is listed anywhere to lead the league in anything.

At tight end is T.J. Hockenson, who may just be primed for a breakout year, which might end up being the bright spot for this offense.

And while the skill position players clearly leave a bit to be desired, the offensive line — which now includes first rounder Penei Sewell — is actually pretty darned solid, with Pro Football Focus grading it out as the 10th best line in the league with plenty of room to grow.

When it comes to wins and losses, oddsmakers aren’t too keen on the Lions in the new 17-game season.

A better bet, perhaps, might be at FanDuel, where the number is set at 5 wins, with the over paying even odds and the under at -120.

A few other season-long bets include the Lions as:

And when it comes to week one action in the regular season, the Lions will be at home taking on the San Francisco 49ers Sept. 12. So much for home field advantage, as the Lions are 7.5-point underdogs across the board, with the best bang for the moneyline buck happening at FanDuel, where it’s set at +310.