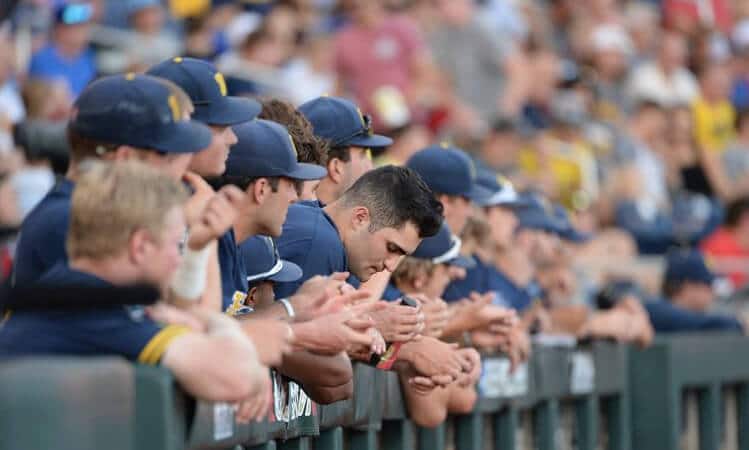 Thursday marks the start of the MLB season, as fans flock to stadiums across the country for opening day. It won’t be the first time this year that fans legally bet on regular-season baseball games in America, though, as national sportsbooks like DraftKings and Barstool Sportsbook have offered consistent college baseball lines.

“In years past, lines were hit or miss, and many books did not have them,” Action Network contributor Doug Ziefel told MI Bets via email. “This year DK has done a great job of having lines up daily for nearly every major matchup.”

Among the teams to regularly appear in major matchups is the University of Michigan. The Wolverines, who made the College World Series final in 2019, entered the season expected to contend for the Big Ten title.

The Wolverines haven’t quite lived up to their preseason hype — they were picked to finish second in the league by coaches — in the early stages of the season. Michigan is 14-14 overall and 3-3 in league play. The Wolverines just lost a midweek game to Purdue Fort Wayne, a team that’s just 5-22 on the season. Rutgers and Illinois (5-1) sit atop the Big Ten standings, while preseason favorite Nebraska is 4-2 in Big Ten play.

Hail to the Mastodons!

“Michigan has some ground to make up in the Big Ten as they sit around .500 in the conference,” Ziefel said. “Unfortunately, there are a handful of more talented teams in front of them. They already dropped a series to Iowa, and later series against Ohio State, Indiana, and Rutgers could very well decide the conference. Although if they can manage to take two or three of those series, they will be right in the thick of a conference title race.”

Given its lackluster start to the season, Michigan is +10000 at DraftKings to win the national championship. The Wolverines are a longshot, and they’d need improvement at the plate and on the mound to make a serious run in the postseason. Fortunately, plenty of season remains as Michigan looks to contend in the Big Ten.

Michigan State wasn’t included in the preseason top six of the Big Ten, and the Spartans are 12-13 overall and 1-2 in conference action. The Spartans don’t have nearly the college baseball history as the University of Michigan — Michigan State hasn’t made the NCAA Tournament since 2012 and it hasn’t appeared in the College World Series since 1954.

While the Spartans aren’t expected to do much this season, the program does have a winning record under head coach Jake Boss. He took over the program in 2009 after a season leading Eastern Michigan, and he’s taken the Spartans to one NCAA Regional.

While college baseball isn’t as popular as college football or basketball, baseball and softball are both growing at the collegiate level. Over 200 games will air on ESPN channels this season, and more than 2,000 games will be streamed on ESPN platforms.

Games in the South often attract thousands of fans, especially for some SEC teams. Ole Miss and Mississippi State each welcomed over 10,000 people into their stadiums on their opening days in February.

Warm weather plays a role in the popularity of college basketball in Southern states, especially when it’s comfortable to attend early season games in February and March. Programs that place an emphasis on building a strong game-day atmosphere often see results as well.

“Minor league baseball teams are being cut, management at MLB acts like they hate baseball, and we’ve seen proof of concept in plenty of college markets,” Matt Brown, a college sports reporter and the publisher of Extra Points, wrote in a recent newsletter. “If you take the product seriously, invest in it, build a good experience for your students, and play when it’s at least 55 and sunny, people will come.”

If the sport grows in the coming years and is more easily viewed on ESPN and other major networks, it’s possible the betting market also grows. The same could prove true of college softball, which also is becoming more widely available on ESPN networks.

“I think that college baseball lines will become a staple for books in the future,” Ziefel said. “They benefit from having two big windows of popularity at the beginning of the season in March, which is before MLB, and then again in June with the College World Series. The College World Series is a spectacle for all baseball fans and will have tons of action on it.”

Indeed, summer college baseball action in Omaha is quite the spectacle, as the city embraces the event each year. Barstool Sports even sent a few of its personalities to Omaha last season, drawing attention to the games and their betting options.

If Michigan makes it back to Omaha and the College World Series, fans of the Wolverines living in Michigan can back their squad through legal betting platforms, which wasn’t possible in 2019. Even if the Wolverines don’t make a run at the CWS any time soon, legally wagering on regular-season college baseball is as accessible as ever.