Bettors Warming To In-Game Wagering, But Still Attracted To Parlays

Bettors in the United States are coming around to in-game wagering and continue to love their parlays according to Kambi's Max Meltzer. 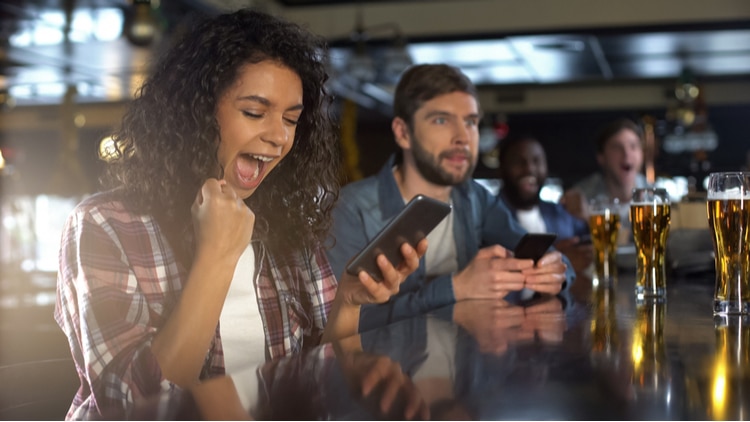 Bettors in the United States are becoming more savvy, leading to a rise of in-game wagering, while parlays continue to be a prime draw for brick-and-mortar sportsbooks according to data shared during the Global Gaming Expo on Wednesday.

Max Meltzer, the chief commercial officer at Kambi, provided some insight into the statistics his company compiled dating back to last year. Kambi has sports betting platforms spanning 11 states, and some unique trends created during the COVID-19 pandemic have retained portions of their foundations as casinos try to navigate operating during a pandemic.

Basketball accounted for a majority of all wagers placed in the two-plus months prior to the pandemic at 61%, with football (13%), tennis (11%) and hockey (7%) rounding out the top four on Kambi’s platform. The global shuttering of major professional sports resulted in a temporary shift of where the betting money went, most notably to table tennis and soccer, which accounted for 63% of all bets placed in a four-month period from March-July.

Those sports ceded ground back to traditional sports when pro sports resumed — basketball again regained its spot atop the pecking order with baseball a close second as it began its truncated schedule — but soccer and golf also proved popular in that busier period. Soccer represented 8% of Kambi’s handle, double that of pre-pandemic, and golf accounted for 4% after being lumped into an “others” category from January-March, and 3% of wagers were placed on table tennis.

“What I can tell you from that (pandemic) period of time is that buildup from soccer, the third-biggest league (behind table tennis and Belorusian soccer) at the time was FIFA, our eSports league within soccer and that has continued to prove itself a success,” Meltzer explained. “What was interesting during lockdown is elements like golf, which really didn’t have so many events going on at the time, but generating significant bets.”

The dearth of sporting events resulted in the creation of more in-game markets for sports betting, and the data reflected that uptick. In-game wagering accounted for nearly 40% of all U.S. bets placed on Kambi’s platforms during the four-month lockdown compared to 26% prior.

While there has been some regression, the split for the period after lockdown was 70%-30% for pre-game versus in-game wagering. In-game wagering has made its biggest mark on NFL betting, where it has surged to 30% of all bets placed this year compared to 10% in 2019.

“We have seen a significant amount of instant betting growth as PASPA has been repealed,” Meltzer said, “and I think there is an element of the educational part of what we do. And of course there is far more exposure in relation to learning about the offerings and the expansion of offerings that we have. So you see a lot more instant markets become relevant as it relates to live bets.”

Still a place for the brick-and-mortar bettors

Even with the rise of online wagering, Meltzer pointed out some data showed there are places where retail sportsbooks have an impact. Contactless transactions in the COVID-19 era have taken on a greater importance for people, and there has been an uptick in using self-serve kiosks — something Meltzer, who is English, admitted he was skeptical about in his first travels around the U.S. in 2016 and 2017 before PASPA was repealed in May 2018.

He pointed out that slightly more than 80% of all retail transactions this year were being made at self-serve kiosks, an uptick from 75% over the same period in 2019.

“The scenario that kiosks would become redundant in some way because people don’t want to touch things … we were very fascinated about what we heard,” he said. “The reality is in the land-based casino where there is absolute cleanliness and social distancing and people being assured the kiosks queues are being effectively monitored, people want to use kiosks more than interact with people.”

Meltzer’s data also showed the on-going popularity of parlays in a two-week sample size taken from September 2019 and September 2020. Overall, parlays accounted for 66% of wagers placed in that period this year compared to 61% in 2019. Additionally, there were clear trends of bettors taking action across multiple sports beyond the NFL as single-sport parlays dipped from 82% to 63% year over year.

The crossover of basketball and baseball schedules this year proved alluring as Meltzer noted 53% of parlays placed that had a wager on a basketball game also included one on baseball.

One other area where retail sportsbooks were doing well of late was in the size of bets placed. Kambi reported the average sports betting wager on-site was $66 compared to $31 online, and the top three states in terms of size of bets — Michigan, Mississippi, and New York, which has DFS wagering — do not have a mobile component at this point.

The three states on the bottom of the list where Kambi operates, New Jersey, Colorado, and Indiana, all have mature — or in the case of Colorado, rapidly maturing — mobile and online sports wagering.